Emmy is a small Swiss manufacturer of rare models. First models by Emmy have been produced in England. All were made of white metal in 1:43 scale. Current range consists mostly of 1:32 and includes slightly more than 10 models produced periodically in limited series. Only AFM Typ 50 exists in the version of 1:43 as well. Emmy also produces spare parts, especially, wheels and tyres, for 1:32 models. 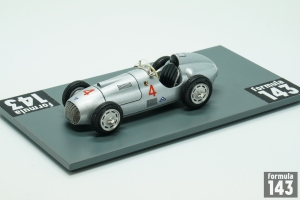