Gama was a German maker of toys, and later diecast and plastic models, of all scales. usually cars and trucks. The company was started by Georg Adam Mangold in 1882 making tinplate mechanical toys. Gama was headquartered in Fürth, Bavaria, near Nürnberg, a traditional German toymaking center. The name of the company is the acronym for his founder initials. Gama metal 1:42 or 1:43 scale vehicles were introduced in 1959. The company survived until 1994 when it was absorbed by Märklin. 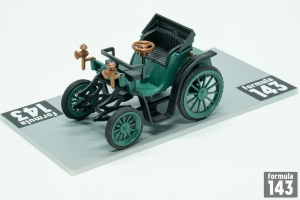